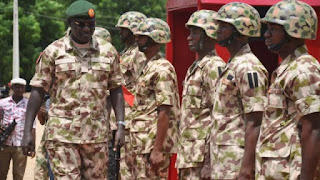 Emerging report from Premium Times (not Page 36), indicates that 356 Soldiers are formally exiting the Nigerian Army, citing “loss of interest”, indicative of broken morale in the Army under the Leadership of the Chief of Army Staff, COAS, Lt. Gen. Tukur Buratai,
The Army is currently engaged in various combat operations, as insecurity worsens across the country.
Many of the Soldiers are among the troops engaged in the decade-long war against Boko Haram/ISWAP, in the North-East, while others are from various other formations across the country.
Apart from the 356 who are leaving, for losing interest in the Army, 24 others are exiting because they want “to take traditional title”, making a total of 380 Soldiers, including 2 Master Warrant Officers, and 28 Warrant Officers voluntarily discharging from the Army, according to sources with direct knowledge of the development.
Already, the Chief of Army Staff has this July, approved the voluntary discharge of all the 380 Soldiers, who are to proceed on terminal leave on December 20, and disengage on January 3, next year, in accordance with the Nigerian Army Administrative Policy and Procedure, 27 Paragraphs 3 and 4, Premium Times sources confirmed.
That the reason given by most of them is ‘loss of interest’, is an indication of low morale in the Army, due to poor Leadership”, one Army insider said, claiming the Army has been “broken, demoralised, and polarised more than ever before under Buratai”.
“It is an indication of the rot in the system”, said another Officer who knew about the mass disengagement.
More than those enduring the long official process to exit the Army, many Soldiers have deserted the Army, especially from among the troops combating Boko Haram in the North-East, sources in the frontline said.
At various times, Commanders and Soldiers have appeared in videos complaining about logistical support and equipment available to them to combat the terrorists in a war that has in ten years, precipitated a humongous humanitarian disaster in the Lake Chad region, displacing millions of people and killing thousands.
In one case, a former Commander of Operation Lafiya Dole, Olusegun Adeniyi, appeared in a rare video, admitting that Soldiers were outgunned by the terrorists. In that video, March this year, Adeniyi could be seen among disorganised troops, decrying losses of men and equipment in a particular encounter with Boko Haram, who were “facing us” from “every flank, with not less than 15 gun trucks”.
Adeniyi was swiftly removed from his position after the video emerged, with the current Commander, Faruq Yahaya, taking over.
On Tuesday, troops of 25 Brigade on Patrol were ambushed by terrorists on Damboa-Maiduguri Road. In the ensuing fight, 37 Soldiers were killed in action, and “about 60” unaccounted for, according to security sources briefed following the losses, which also included 9 gun trucks.
“Tempers were rising among the troops of 25 Task Force Brigade”, a source in the frontline stated, after the attack on Tuesday, before “the efforts to calm the situation”,
However, the Military officially told the public that only 2 Soldiers died, while 17 terrorists were killed.
“That official Press release is a total lie to preempt the Press”, one Army source told Premium Times.
The source said that the misrepresentation was to avoid having to answer questions about the use of heavy funds, and also to prevent renewed calls for the removal of the Service Chiefs.
Apart from the North-Eastern anti-terrorism operations, the Army, alongside the Air Force, is combating the spiralling armed violence from rural banditry and farmer-herdsmen conflict in the North-West and North Central. In these areas, the exacerbating insecurity appears to have gone beyond the constabulary capacities of the Police.
Even in the South-East, the Army has been involved in Federal efforts to stop the secessionist threats; and in the Niger Delta, it helps in protecting oil and gas infrastructure.
Meanwhile, apart from the 380 Soldiers voluntarily exiting the Army, mostly for losing interest, 6 others are being discharged based on the recommendation of the Armed Forces’ Medical Board.
Thus, a total of 386 Soldiers are disengaging, and 356 among them have opted out over “loss of interest”, amid morale crisis in the Service.
Units and Formations have been directed to recover all Military items from the affected Soldiers, who are to report to the Army Headquarters for documentation by October 20, and complete forms to make withdrawals from various contributory schemes.
Many more have deserted without any official process, according to Premium Times sources.
“They just abandoned their guns and uniforms and ran away”, one source said.
The Spokesperson for the Army, Musa Sagir, denied claim of low morale in the Army.
“The Nigerian Army is in very high morale”, he noted.
He added that the Army is “very well” prosecuting all the operations it is involved in, whether “the insurgency in the North-East, and banditry in the North-West”.