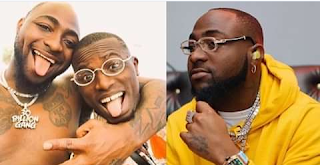 Davido’s personal assistant, Aloma DMW is not happy with people who usually tag him as ‘Davido’s houseboy’.
During a live session on Instagram today, Aloma said that he really doesn’t understand why everyone on social media and beyond refers to him as Davido’s houseboy.
Aloma during the live session disclosed that he has tried his best to stop people from calling him a houseboy, but all efforts have been ineffective.
The AMW head honcho further said that after much thought, he’s beginning to overlook the ‘houseboy’ tag because, being a houseboy to Davido is way better than being a bank manager.
Backing his opinion, he said he’s cashing out on a steady basis because of his relationship with Davido.