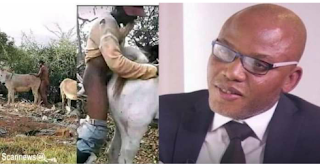 Leader of Indigenous People of Biafra (IPOB), Mazi Nnamdi Kanu on Sunday mandated people of the South East to stay clear from consumption of cow meat for health purposes.

Kanu instructed the order be adhered to in order to control the level of disease leading to early death within the region.
white; box-sizing: border-box; color: #363636; font-family: lato; font-size: 15px; margin-bottom: 17px; padding: 0px;”>Making more clarification, the IPOB leader cited an instance of some cow rearers often sleep with most of these animals under their custody before butchering for sale.
we understands that some incriminating video footage, including images, has been spotted in circulation on social media of rustlers having carnal intercourse with a cow.
Kanu’s decision may have been triggered following the continued killing of elderly men and women, rapping young girls within the South Eastern region by armed rampaging Fulani Herdsmen.
Though, He had earlier reacted to the silence of some political leaders and elder spokesmen in the region amid onslaught, ordered youths to go after them with stone anywhere sighted, especially anyone expressing the anger of being insulted or disrespected by IPOB.
However, Kanu withdrew the order and allowed 20 days ultimatum to allow them to come up with a better strategy to curb the menace by the herders.
Meanwhile, during the cause of the programme, Mr. Kanu turned down the view to allow Nigeria to run under a confederation system where four regions (Oduduwa, AREWA, Biafra and Middle Belt) and will be created out of the country and manage their economy and affairs exclusively.
Nnamdi Kanu was responding to a caller from London who identified herself as a prophetess, allowed to use the medium pass a revelation she claimed was revealed for Kanu.
He insisted the revelation was late following the thwarted Aburi Accord agreement held in Ghana between Nigerian and Biafran delegates between January 5-7, 1967 before the civil war broke out.
He added that Nigeria can not be restructured because it has no existing structure to hold onto.
The Director of Radio Biafra, London, nonetheless, revealed while he allowed the aforesaid woman to air her opinion noting that Biafra of his dream will be democratic, where everyone will be allowed to exercise his or her view.
Listen here: