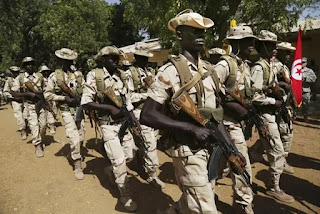 The Nigerian military has arrested 28 suspected spies leaking operational secrets to the Boko Haram and Islamic State in West Africa Province (ISWAP) terrorists.
The suspects, both local and foreign nationals are currently under investigation.
The arrest followed attacks this week by ISWAP on the military post in Diffa, Niger Republic, located along a border area with Nigeria.
Footage of the deadly attack showed insurgents storming a Nigerien army post in Diffa.
The 2:20mins video was released by the Islamic State’s Amaq News Agency, with a statement which claimed its “fighters killed five Nigerien soldiers and wounded others when they attacked the post on May 3”.
The video footage also showed some scenes from the clash, where the fighters entered the post on foot and in vehicles, taking weapons and ammunition.
An intelligence source told PRNigeria that from the Nigerian military camp was virtually empty during the attack as troops were out on counter-insurgency operations along the Lake Chad axis.
The few soldiers on ground retreated because of the large number of terrorists.
The military intelligence has so far arrested 28 notorious informants who were leaking troops’ movements to terrorists. The suspects have provided useful information that could lead to major crackdown on local collaborators and supporters in that axis,” the source said.
However, Chadian troops have stopped participating in regional Counter-Terrorism joint military operation under MNJTF.
President Idriss Deby, had at the end of the April offensive against Boko Haram, announced that Chad would no longer take part in military operations outside the country’s borders.