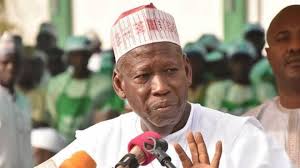 Kano State government has abolished the almajiri system in the state, insisting that saying any parent who sends his child out as almajiri would be prosecuted in court.
Kano State governor, Dr Abdullahi Umar Ganduje announced this on Wednesday, during the COVID- 19 press briefing at the Government House in Kano.
“The state government cannot tolerate any almajiri system in the state. All children must be in school,” he declared.
The governor, however, outlined a list of conditions that must be met by those who are interested in operating almajiri system of schools in the state
Ganduje stressed that the curriculum of such a school must accommodate courses that are offered in the conventional system of education, adding that the proprietor must also “make provision for the children in terms of classroom accommodation, in terms of where they would sleep and in terms of their feeding, so that the children would not be going about begging.
“The system must also conform with the normal system of education; there must be qualified teachers and there must be a system of examination, evaluation and quality control,” he stressed
“We assure the members of the public that Islamic education is being taught in our schools and qualified teachers are being employed,” said the governor.
He assured the current owners and teachers of lmajiri schools in the state that they were not being rendered jobless , adding that the state government is ready to employ any of them and was already recruiting some of them into the state’s education system.
Meanwhile, the coordinator of the almajir programme in the state, Alhaji Sule Garo, has said that the state government has so far repatriated a total 1,172 almajirai to their states across the North, saying that they returned 419 almajrai to Katinsa State, 584 to Jigawa State, 155 to Kaduna State, 38 to Bauchi State and 36 to Gombe state.
Garo, who is also the Commissioner for Local Government, added that the state had adequally received about 100 almajrai from different parts of the North, namely 179 from Adamawa State , 220 from Nassarawa State, 96 from Gombe State and 18 from Katsina State and 82 from Kaduna State, adding that the returnees were quarantine for two weeks before they were reunited with the members of their families.
He said the state government had so far handed over to their 733 Almajarai indigenes of Kano State following the end of their custody in quarantine in the state
“Our health personnel have tested all the almajirai, most of them were negative and those of them that were positive have taken to isolation centres,” he stated.
He disclosed that the almajrai returned to the state from other states were automatic candidates for admission into the state’s almajiri boarding schools situated at Bunkure as soon as academic activates resumed in the state.