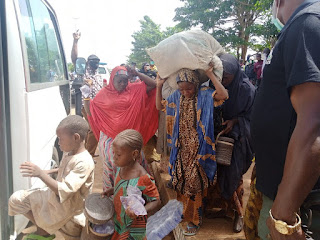 There was apprehension among residents of Akure, in Ondo State on Tuesday over the discovery of 19 Almajiris from the northern part of the country at the Oyemekun axis of the state capital.
According to sources, the Almajiris were dumped at the Dangote Cement Depot in Akure on Monday night where they were found on Tuesday morning.
Residents of the area who said they kept watch over the august visitors when they noticed their presence in the area alleged that the Almajiris were transported to Akure in one of the trucks owned by the Dangote Cement.
It was gathered that the Almajiris had traveled down to the state from Sokoto State despite the shutdown of borders across the state.
Despite being stained with cement dust, one of the Almajiris who gave his name as Garba said they arrived the state on a bus from Sokoto State.
He, however, refused to state why they embarked on the journey into the state as he also refused to state their mission
Reacting to the development, the Senior Special Assistant to Governor Oluwarotimi Akeredolu on Security Matters, Alhaji Jimoh Dojumo who led the state Task Force Team on COVID-19 to the location where the Almajiris were dumped stated that Governor Oluwarotimi Akeredolu has ordered that they are returned to where they came from.
“We received information that some Almajiris numbering about 20 were dumped in this particular location by some trailers at night time and they are stranded here without knowing their particular destination.
Mr. Governor has directed that they should be returned to the way they were coming from because we believe they came in through a border state before they got here. We expected the authorities of those states to check the movements before getting to us.”