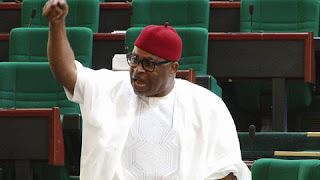 Lawmakers say Nigerians should be able to personally defend themselves if security agencies are unable to curb insecurity.

Members of the House of Representatives have pressed for a constitutional review that allows private Nigerians to bear arms and defend themselves against criminal attacks.
Many parts of the country have been subjected to one form of insecurity or the other for years, with thousands murdered and kidnapped, and millions displaced from their homes.
In the latest high-profile incident that has once again ignited public fury, Boko Haram attacked two communities in Gubio local government area of Borno State and killed between 69 and 96 people on Tuesday, June 9, 2020.
During plenary on Wednesday, June 10, Usman Zanna, representative of Magumeri/Gubio Federal Constituency, Borno, raised a motion to condemn incessant attacks by the terrorists on villagers in remote communities.


The lawmaker said Tuesday’s attack was a reprisal after the villagers had resisted an earlier attack and killed a couple of terrorists.
Zanna said he’s worried that security operatives are overwhelmed and cannot fully protect lives and property of Nigerians.
Toby Okechukwu, a member of the House of Representatives, says Nigerians must be allowed to protect themselves [YouTube/Enjoy Chuks]
In his contribution to the motion, Toby Okechukwu, representative of Aninri/Agwu/Oji-uzo Federal Constituency, Enugu, said insecurity has penetrated every region of the country.
He said the inability or incapability of the security agencies to keep up should trigger the need for people to be equipped to protect themselves.
“When the people who are employed to defend you are not able to do it, you have no option than to fight for your own existence,” he said.
The lawmaker also recommended that the Nigerian government should redirect its funding of social intervention programmes into further equipping the Armed Forces.
Mohammed Tahir Monguno, representative of Monguno/Marte/Nganzai Federal Constituency, Borno, backed Okechukwu’s position, further noting that Nigerians should be allowed access to ‘sophisticated arms’ to better match their attackers.
Monguno, who lamented that his constituency is similarly troubled by Boko Haram terrorists, further warned the government to take the issue of security more seriously.
“Any government that cannot protect the lives and property of its citizens, ab initio, is not supposed to exist a minute longer than absolutely necessary because that is the primacy of governance,” he said.