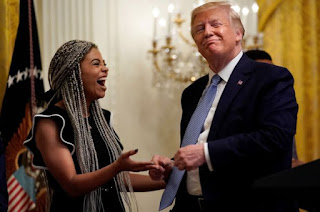 When it comes to the black community, Trump hasn’t always said the right thing, but his policies are better than Biden’s, as student activist and Trump supporter Kearyn Bolin (here at the White House in 2019) likely understands.REUTERS
I celebrated this New Year’s Eve in Ghana, Africa. I’d grown up poor with a mom addicted to drugs but started this decade far from the South Side of Chicago and amongst some of the most “elite” black people in the world. With me was one of my best friends, Nate, an executive for one of the largest technology companies in the world and a former Obama administration attorney; his brother-in-law, a neurosurgeon who graduated from Harvard; a billionaire whose house party we all attended to ring in 2020; and many Hollywood celebrities, including Boris Kodjoe and Nicole Ari Parker. This was to be the start of the best year of our lives.
Back home in the US, African Americans were experiencing the best economy we have ever seen: Unemployment for our racial group was the lowest in recorded history, black wages were rapidly increasing for the first time in decades, and people who’d been out of work long-term were being hired and suddenly able to take their families on vacations for the first time in years.
The Trump policies made it possible. Tax cuts and rocketing GDP growth meant companies were feeling financially stable for the first time in a decade and public confidence in our economy had never been higher. Trump’s re-election was on cruise control. Even Democrats were willing to admit that the chances of Trump losing were slim.
No one could have predicted what would happen next.