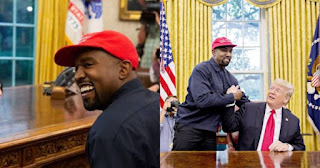 US billionaire rapper, Kanye West has vowed to win the 2020 presidential race

Speaking in an interview with Forbes which was published on Wednesday, the super star announced that he no longer supported President Donald Trump.

Recall that West over the weekend announced that he would run for president in 2020.
He emphasized that he entered the presidential race to win it.
Making reference to Trump’s trademark, red, “Make American great again“ baseball caps, Kanye said: “I am taking the red hat off, with this interview.
“Like anything I’ve ever done in my life, I’m going to win”, he added.
This is not the first time the rapper and husband to Kim Kardashian will be making his intention to run for the president.