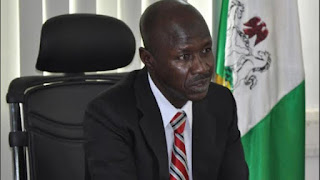 The Peoples Democratic Party, PDP, has reacted to the invitation of the Acting Chairman of the Economic and Financial Crimes Commission, EFCC, Ibrahim Magu, by the Department of State Services (DSS).
The PDP, in a statement shared on its official Twitter handle on Monday, said the development confirms malfeasance in EFCC
The party said Magu should now step aside to forestall destruction of evidence against him.
The PDP asked the President Muhammadu Buhari-led administration to show the genuineness of its war against corruption by allowing the unhindered investigation of the acting Chairman of EFCC.
The party said Nigerians were already aware that the EFCC boss has been pulled in for questioning.
The main opposition party noted that the fact that Magu has to be accompanied by his lawyer shows that the said “invitation”, is beyond the routine.
The PDP holds that the development around the @officialEFCC acting Chairman as well as the desperate attempt by the Commission to cover or waveoff his investigation, only raise more integrity questions regarding Magu’s activities in the EFCC,” the statement added.
“Only last month, the Attorney General of the Federation and Minster of Justice, Abubakar Malami, released a memo in which he indicted Magu of alleged diversion of recovered funds and fraudulent sale of assets seized by the @officialEFCC.”
The PDP it was keenly monitoring the development alongside Nigerians and indeed, the international community are and expect the Buhari-led presidency to muster the courage to carry out a comprehensive investigation and make its findings available to the public.
The PDP called on the Buhari administration to order Magu to step aside, adding that this will preserve the integrity of the office of the Chairman of the EFCC.
Moreover, with the allegations and investigation, Magu has lost the moral rectitude to continue to preside over the anti-corruption agency. He should step aside until he proves himself innocent.”
DAILY POST reported on Monday that Ibrahim Magu was invited by the Department of State Services (DSS) over allegations that he owns four properties.
In 2016, DSS accused the EFCC boss of living in a N40m mansion paid for by one Umar Mohammed, a retired Air Commodore.
However, the EFCC said Magu, was “not arrested” on Monday.
According to the EFCC, he only honoured an invitation by a Presidential Panel reviewing the activities of the agency.
The Head of Media, Dele Oyewale, said this in a statement on Monday
He said the review was held at the Banquet Hall wing of the Presidential Villa, Abuja.
In the same vein, the Department of State Services (DSS) said it did not arrest Ibrahim Magu as widely.
But despite the rebuttal, it was gathered that DSS blocked Magu in Wuse traffic shortly after he left office.
He was then taken to the Presidential Villa.
Magu is being reportedly grilled over allegations against him.