Popular Nigerian twitter influncer, Aunty Ada has take to the micro-blogging platform to reveal how Igbo men show their romantic side.
In a post she made on the micro-messaging platform on Friday, June 12, she said that Igbo men show how they love by action and not words.
See her post below ; 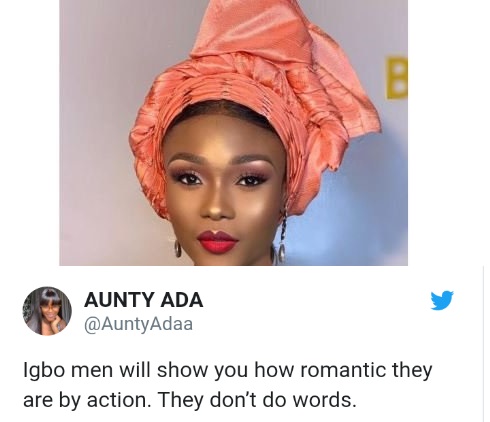 So many social media users reacted to the tweet. While some ladies said they want an Igbo man, others did not quite agree with Aunty Ada’s theory.
See reactions below ;

Tumi Suara@honeydrops_19
I agree with this https://twitter.com/auntyadaa/status/1271367419941007360 …
AUNTY ADA@AuntyAdaa
Igbo men will show you how romantic they are by action. They don’t do words.

@_OnlyFemaleKing
If this isn’t my dad , idk who is

Mackie@Amakah_
That’s why I stan my husband baje https://twitter.com/auntyadaa/status/1271367419941007360 …
AUNTY ADA@AuntyAdaa
Igbo men will show you how romantic they are by action. They don’t do words.

AUNTY ADA@AuntyAdaa
· Jun 12, 2020
Igbo men will show you how romantic they are by action. They don’t do words.

17 people are talking about this

AUNTY ADA@AuntyAdaa
· Jun 12, 2020
Igbo men will show you how romantic they are by action. They don’t do words.

@PenGoddess3
There are probably two types of Igbo men out there

This nigga told me once that if he doesn’t show that he loves me then I should just “Believe” it with FAITH. Coz it’s fate that brought us together