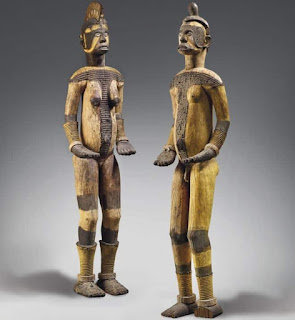 ⁣The statues, labelled “A Couple of Igbo Figures Attributed to The Akwa Master“, were sold to an online bidder on Monday despite controversy surrounding how the company gained possession of them.⁣⁣A Professor of African and American Diaspora Art, Chika Okeke-Agulu, had launched a spirited campaign over the pass few weeks to stop the sale of the statues; Igbo Alusi figures.⁣⁣He had argued that the statues were two out of dozens of local artifacts stolen from the southeast region where they were made while the Igbo natives of the region were locked in a deadly civil war with the Nigerian government between 1967 and 1970.⁣⁣“These artworks are stained with the blood of Biafra’s children,” Okeke-Agulu wrote in an Instagram post on June 6.⁣⁣However, Christie’s said it doesn’t believe the statues were acquired illegally by Jacques Kerchache, the French collector that owned them.