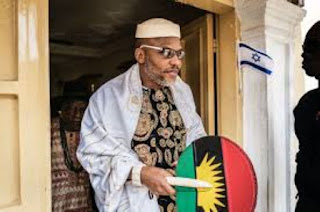 Stakeholders in the Ijgbo project weekend criticized the Indigenous Peoples of Biafra(IPOB), under the leadership of Mazi Nnamdi Kanu for its prosecution of the Biafia struggle but also acknowledged that the movement was needed for the emancipation of Igboland.The meeting which was facilitated by Nsuko Ummuna between Igbo leaders and Mr. Kanu said the majority of Igbos supported IPOB but were disenchanted with the manner the movement was attacking prominent Igbo leaders and politicians which, according to it, signaled lack of cohesion within the political establishment.In a resolution signed by Architect Bishop Chukuma and Mr. Kanu issued after the July 5 meeting, both parties acknowledged the personal sacrifices the IPOB leader has made in fighting for the rights of the Igbo nation but said an effective and comprehensive strategy was needed to achieve the set goals.“There is the need to move away from attacking our political leaders, and quietly begin to pressure and guide our leaders on what they should be doing to advance and protect Igbo land. We can correct in love and in respect,” according to the resolution, advising that no traditional rulers and religious leaders should be demonized as part of the struggle.The stakeholders also agreed to urgently tacke security issues and other existential threats to Igbo land, and said any such efforts can only be achieved through a deliberate means to achieve political cohesion which is currently lacking in the area.The stakeholders also urged governors in the South East region to provide an enabling environment for the adoption of the Alaigbo investment approach which is being supported by Igbos in the diaspora.The resolution noted that Mr. Kanu conceded to changing his approach if there were other reasonable ways to do the same, and agreed that all public statements by the IPOB leader should henceforth reflect the new spirit.