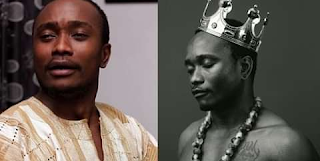 Nigerian singer, songwriter and author, Olawale Ashimi also known as Brymo has declared himself the finest African artiste alive.
Ọlawale Ọlọfọrọ, as he is fondly called made this known via a tweet he sent out on his official Twitter handle on Thursday, 21st May.
The 34-year-old singer started recording music in 1999 while in secondary school. He signed a record deal with Chocolate City in 2010 but was accused of breaching his contract with the label in 2013.