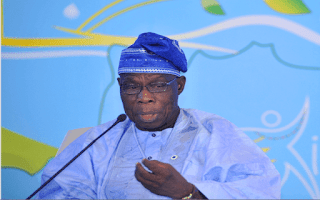 ABUJA — Former president Olusegun Obasanjo has in a speech at an event, titled ‘why I am alive campaign’, organized in Lagos, said he’s unsure whether or not president Muhammadu Buhari is really in charge of his government.
He said the confusions in the country and within his (Buhari) administration is a clear indication that the president is not in charge. He also said that the president is surrounded by people who exploit his weaknesses, to their own advantage, and in doing so, ilI-advice the president into sinking the country deeper into economic woes.
In reference to the President’s advisers who insist that the country has more room to borrow more funds, Obasanjo said, “Everyone knows that our governments are notoriously deficient in serious and adequate discipline and most often lack competence and consistency as well.”
“I do not need the brain of any genius to conclude that those who use statistics to dig us deeper into debt are our enemies.
What is more we are not doing enough to address the fundamental, deep-seated and structural challenges that inhibit the expansion of our economy.
Special Assistant on Media and Publicity, to President Muhammadu Buhari, Femi Adesina, previously said in a statement while quoting the International Monetary Fund (IMF), that “Nigeria’s economy has the capacity to absorb more loans” and that Nigeria’s GDP can service more loans than it is taking.
Adesina also said unlike previous administrations, the Buhari administration does not borrow for its own pocket, but for the development of the country.
He said, “Taking loans to use for development is not a crime. But taking loans to steal and pocket as we used to have it in this country is what is criminal.”
This among other statements according to Obasanjo, is misleading, manipulative and would only drag the nation into more troubles.
President Muhammadu Buhari was reportedly suffering from dementia, and that powers within his government are said to be taking advantage of the President’s health condition to manipulate him.
Source