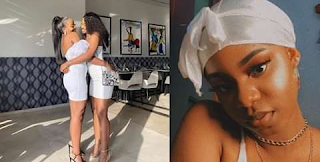 Priscilla Ojo, a model and daughter of popular actress, Iyabo Ojo, was recently dragged into an Instagram conversation with a nosy fan and it didn’t end well for the fan.
It all began when Priscilla shared the above photo of herself and her friend. A nosy fan raised an eyebrow at the photo and decided to ask if she was gay.
Priscilla obviously got irritated by the question and she offered an apt reply calling the fan an ”Ode”.

See the exchange below ;