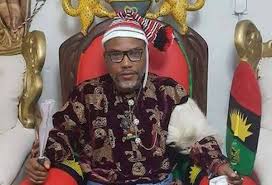 The leader of the Indigenous People of Biafra, IPOB, Mazi Nnamdi Kanu broadcasted live on Sunday, 5th July 2020 in another address to Biafrans and the world at large.
During the broadcast, a New York-based Prophetess, Oyetutu Adebanjo joined the program. According to the prophetess who claimed she has an interesting spiritual perspective on the divine purpose of IPOB and what Biafra restoration portends for Oduduwa and other ethnic nationalities trapped in the damnable contraption.
Prophetess Oyetutu in her words said that God spoke to her in a vision that Nigeria will remain one but in four regions. She went on to convince Mazi Nnamdi Kanu to drop the Biafra agitation and pursue a Nigeria with four regions.Mazi Nnamdi Kanu in response told her that same restructuring was the reason more than five million people died during the war.
He also said that it’s only God that can create a nation. No man can create a nation, stressing that Nigeria was created by a man named Lugard.
His other key points went thus: “We are making it abundantly clear to those who care to listen, and those of you who are stirring Nigeria into devolution, we are no longer part of it.
“Tonight, I want us to center tonight discussion based on the assertion of our sister, prophetess who wants an undivided Nigeria.
“I want us to take away that, there will be a division, every parts will go on her own, and the Fulani will go back to FUTA JALON where they belong.
“It was the devil that built Nigeria, it was the devil that used a horrible man to create Nigeria.
“I want to tell you what the Hausas are going through in the hands of the Fulani, I was speaking to a very important personality, do you know what he told me? When you go to some parts of the North, you will see a monument of a Fulani royal crown on a horse with an Hausa peasant slave following him on foot doing Ranka dede.
“I want everybody to tell me if this is a lie.Sultan of Sokoto where is he from? Is he not a Fulani in a foreign land?
“Governors of the Northern state are all Fulani not Hausa, including all the Imams.
“When they were slaughtering the Hausa Kings with the help of some Hausa indigenes, with the disgust that they are bringing them better Islam.
“They tried it with Oduduwa and slaughtered them. They also tried to do same with the Nupe, and Gbagi people. The person who published this article on what the FULANIS has done to the HAUSA, his names are Vincent Okoye, please share it wide.
“If you don’t want to be like the HAUSA people, then it is all up to you to do the needful.
“Before I came on air this evening I had some meeting with some very important people in our land, and we agreed on some certain things. One of the things we agreed upon is to wind down our consumption of cow meat; If no one buys their meat, they will not come to our land.
“They were also concerned about how we address those who disagree with us, and I agreed to look into it.
“Those who are complaining that we insult them should look at what is happening in the North.
“Those who do not agree with us should keep their mouth shut and stop talking rubbish about us. Keep your mouth shut and continue serving your JANJAWEED masters.If you encroach into our territory, you will not be spared.
“Do you know that the sponsors of Fulani herdsmen are Fulani? Now they have came out to tell you that they will not expose them.
“They were concerned that IPOB is spending nearly $80,000, but they are not bothered about Boko haram and fulani herdsmen. Just because we left them alone, that is why they are busy talking RUBBISH.
“You people don’t know that you are under a curse. Nigger-area is a curse. You people don’t know the mess the ZOO is in. The military are busy raping their women in Taraba state.
“Where is Gowon came from? he is from a place called Angas, he was the one used to kill people, today his people are under siege and he can’t speak.
“You said you don’t want to fight a war, so are you telling me that you will be in your house and someone will come and rape your women?. After sleeping with the cow, they will come and rape your women.
“The HAUSA people are now fighting back, enough is enough.
“This is what you get when you put Fulani in power, your life will be a mess.
“Nigeria is going to have their own fair share of Fulani all over the world.
“I thank you all for listening, and that is why we proclaim, that Biafra is more than the comprehension of mere mortal. Biafra is our Religion and here on radio Biafra is where we worship.”