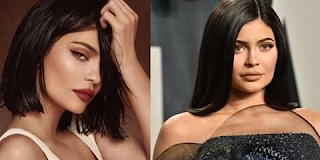 Last year, American reality star, Kylie Jenner became the youngest self-made billionaire ever, at 21, as named by Forbes.
However, according to new findings by forbes ; Kylie’s business is significantly smaller, and less profitable, than the family has spent years leading the cosmetics industry and media outlets, including Forbes, to believe.
Forbes are now claiming she’s no longer a billionaire as they have uncovered inside Kylie Jenner’s web of lies and revealed why she’s no longer a billionaire.

The reality star and entrepreneur has reacted to the viral reports and she says she’s got so many more important things to channel her energy to at the moment and thus she won’t be bothered on developing an obsessive attachment to how much money she has.
She wrote on twitter ;
i can name a list of 100 things more important right now than fixating on how much money i have