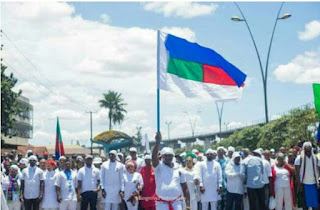 Apex youth organisation in the Niger Delta, the Ijaw Youth Council (IYC), has told Biafra and Oduduwa secessionists to leave the Ijaw nation out of what they call ‘their utopian republics’.

Chairman, IYC Transition Implementation Committee, Kennedy Olorogun, said this on behalf of the organisation on Saturday.
According to him, the Ijaw nation does not need to be annexed to other imagined ethnonational territories.
He said the Ijaw nation is currently confronted with the renewed quest for nationalism within the Nigerian geopolitical arrangement.
Olorogun noted that the situation in the country may have compelled other tribes, groups and ethnic nationalities in the country, such as the Oduduwa and various movements championing the Biafran cause to renew their agitation for separate states.
He said while the Ijaw nation is not adverse to the cause of these groups, the forced annexation and fraudulent redrawing of the geographical boundaries of the Ijaw territories into their dream nations would no longer be tolerated.
We are seizing this medium to inform the promoters and sponsors of the Oduduwa and Biafra republics that they should not include Ijaw territories in their acclaimed nations,” he said.
“The Ijaws are domiciled in Ondo, Edo, Delta, Bayelsa, Rivers and Akwa Ibom States and are prominently resident in all the States of the Niger Delta.”
He said that in this wise, the Oduduwas and the Biafra secessionists should count Ijaw territories out of their utopian republics.
“Ijaws are capable of governing themselves. In this vein, the Ijaw nation is watching the unfolding events within the Nigerian polity and at the fullness of time the Ijaw nation would state their position.”