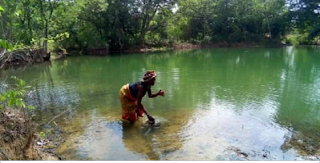 The lake of Okposi in Ebonyi state is one of nature’s wonders. According to Folio NG, the water level in the lake is on the low during the rainy season and high in the dry season. Only scaled fishes survive in it as it has been a source of salt to the indigenes for over 400 years. A local oral story has it that it was discovered by two local hunters who were on the search for water to satiate their thirst. The women in the community have been latching on the power of solar technology to produce salt as buyers come in from far and wide to buy. A popular market called Odenigbo Okposi became known for this.

The lake of Okposi in Ebonyi produces salt and has been the centre of production for the people in the community – Discovered by two hunters in dire need for water according to folklore, it was a good place to get salt during the civil war – The lake birthed a popular market called the Odenigbo Okposi where people come from all over the country to buy salt

The Okposi Salt Lake in Ebonyi. Photo source: Folio NG Source: UGC Okposi lake is located in Ohaozara local government area in the state. It served as a good resource centre during the civil war as people came to it for salt. Another salt lake in the local government is called the Uburu Salt Lake. Though it is bigger than the one in Okposi, its salt production is only seasonal.