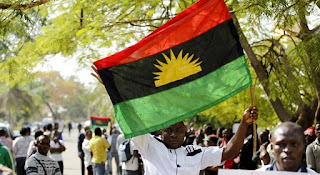 The Indigenous People of Biafra (IPOB) has hinged the realisation of a Biafra nation on referendum to be strictly supervised by the United Nations (UN).
A statement by the spokesman of the group, Emma Powerful, yesterday, said the move is to allow the people decide  if they still need Biafra or want to remain in Nigeria.
“It is quite clear and understandable to every citizen of Biafra and indeed the entire world that we need a referendum where the people will exercise their right on whether or not they want self rule or continued existence within Nigeria.
“UN supervised referendum is a must and a right for every human being in Nigeria to unequivocally state where they wish to belong. We in IPOB and Biafrans in general expect the United Nations to supervise this referendum which will enable even those living beyond the boundaries of Biafra to equally determine their own fate. We want freedom for all not just for Biafrans alone. IPOB is making frantic efforts to ensure that this happens in shortest possible time
We are not going to force or intimidate anyone or tribe because the will of the people is sacrosanct and must be respected. Each individual will be allowed to decide for themselves where they wish to belong.
“The raging Biafra agitation led by our leader Mazi Nnamdi Kanu is a divine project and we are confident of securing over 99.9 percent approval any day a referendum is held because more tribes and clans outside the South-East and South South are indicating interest to be recognised as Biafrans.
“The nation of Biafra will be a democratic state where the people will decide what they want. People of various nations in the new republic shall be in charge of their own affairs while the centre will only have control over the defense of the country against ‘external aggression’ and foreign affairs.”