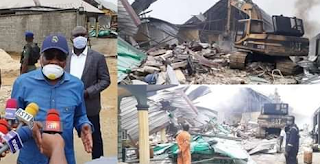 Governor of Rivers State, Nyesom Wike, has carried out the threat he gave of demolishing Prodest Hotel at Alode in Eleme Local Government Area of the state. 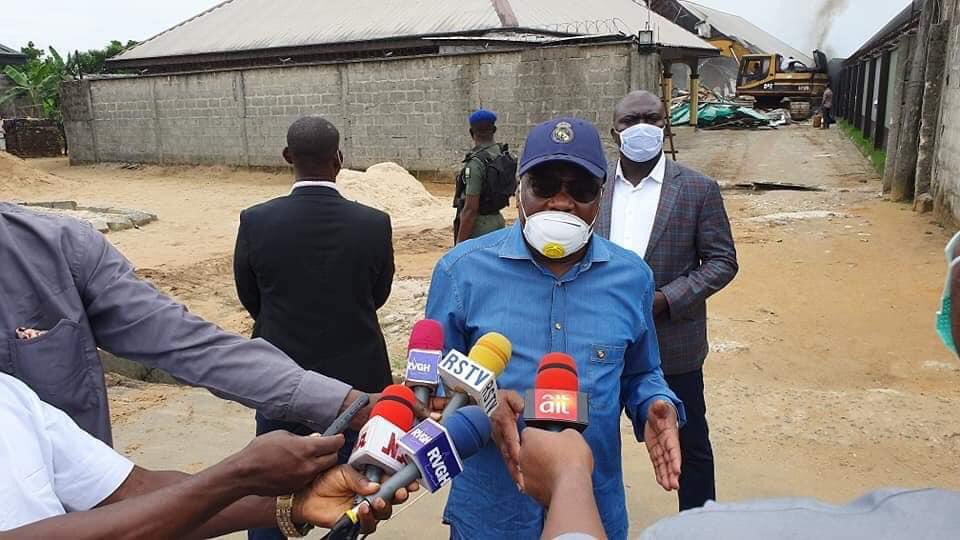 The governor had marked the hotel and one other, Etemeteh Hotel, Onne for demolition for allegedly flouting his government’s directive on the closure of hotels in the state.
Governor of Rivers State, Nyesom Wike, has carried out the threat he gave of demolishing Prodest Hotel at Alode in Eleme Local Government Area of the state.
A lot of residents of the state however, felt it was only a threat to make other hoteliers put themselves in order, but were certainly taken aback when a demolition truck arrived at the location of Prodest Hotel at about 11:30am Sunday morning.
As seen in photos that are currently trending on social media, the demolition men were accompanied by the Governor himself and other officials of the Rivers State task force, and the building was eventually brought down. 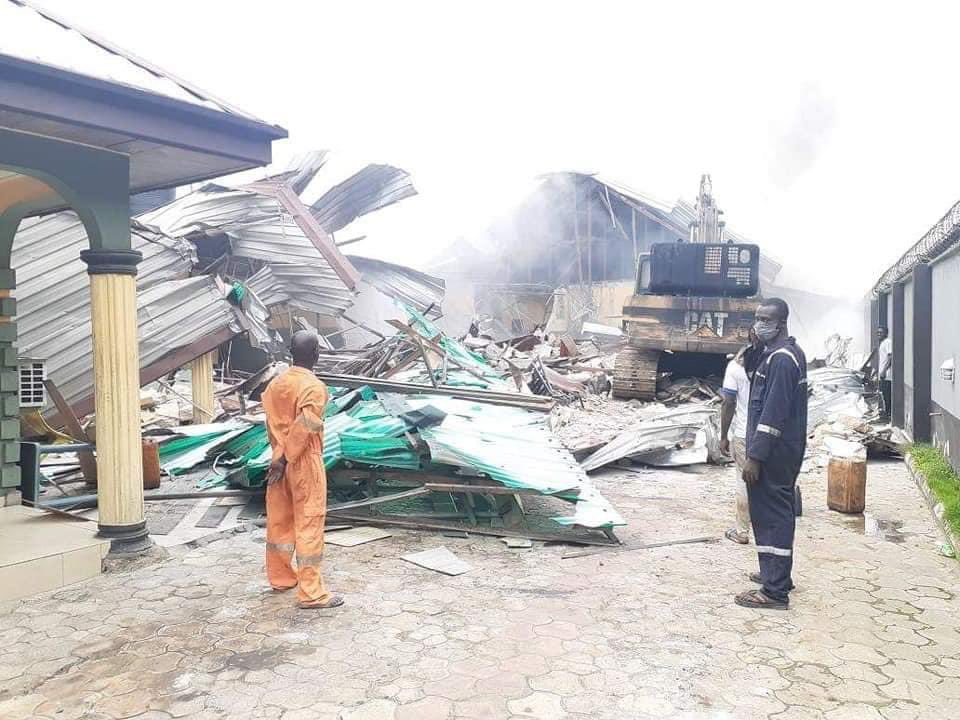 The Rivers State Governor had declared a total lockdown in two major cities in the state —Obio-Akpor and Port Harcourt City Local Government Areas— in his effort to curb the spread of COVID-19 in Rivers state. Interstate borders, markets, pubs, restaurants and hotels were also closed by the governor. 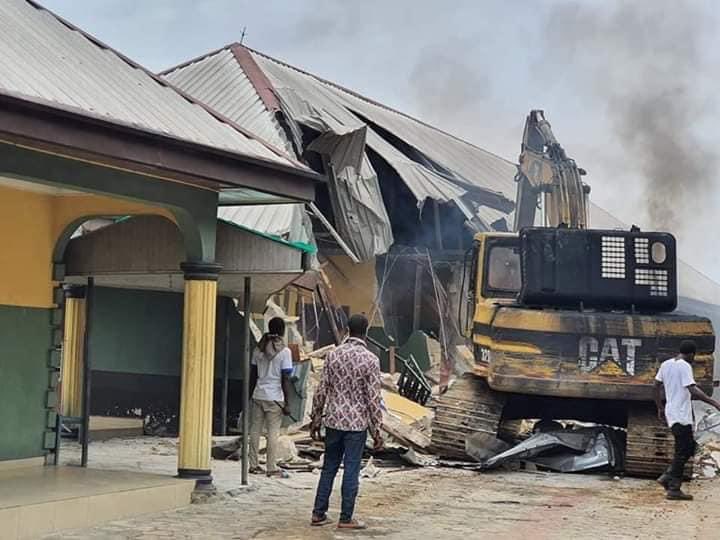 Democracy in action in Rivers as Supreme Emperor Nyesom Wike arbitrarily ‘demolishes building’ because of coronavirus. 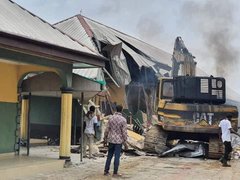 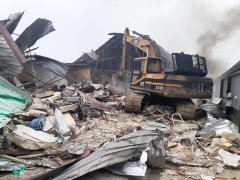 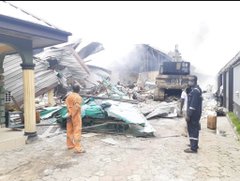 150 people are talking about this

Theresa Tekenah@TheresaTekenah
The decision to demolish hotels in Rivers state over violation of the COVID-19 lockdown order is extreme and illegal. Gov Wike, this isn’t leadership. 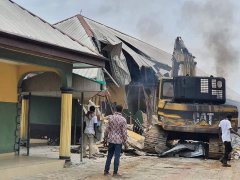 438 people are talking about this

Comrade Deji Adeyanju@adeyanjudeji
The demolition of the hotel was unnecessary. Temporary closure would have been enough. Wike is over doing it. Those their property was demolished should seek legal redress.

237 people are talking about this

Leo Dasilva@SirLeoBDasilva
I hope the energy Governor Wike is using to enforce the lock down, he is also using it to increase testing and isolation centre capacity in Rivers state.
Fighting this virus is not about being performative but being readily effective.

263 people are talking about this

mr_robmichael pitied you and@mr_robmichael
I repeat, Wike is not your Governor’s Mate.
Wike has more balls than Buhari. 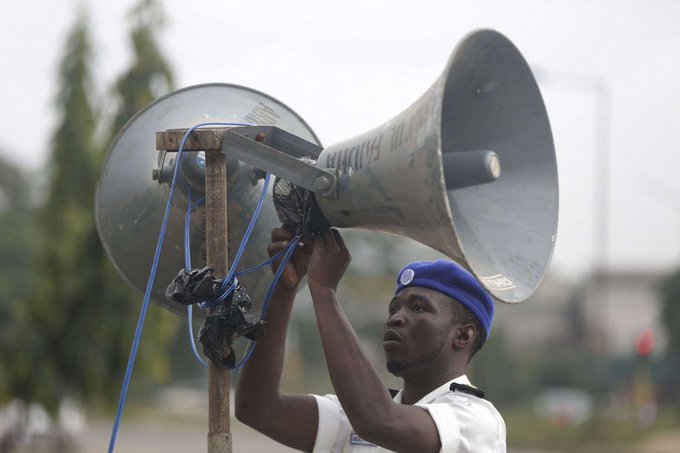 235 people are talking about this

Dr. Dípò Awójídé@OgbeniDipo
Wike was showing necessary action and ensuring security agencies do their job well. He was conmended for that by many & rightly so. But going on to demolish an hotel is definitely way out of order. That sort of action is really condemnable. A fine should have been appropriate.

1,086 people are talking about this

Iriobe Ofunre@erahomo
As a governor with executive powers, there are some lines you should not cross even when backed by law.

Gov. Wike should apply the law with a human face.

Olamilekan@Lexybabs
· 4h
Replying to @supabara
And the penalty should be demolition?

@milly_mai_
Y’all shouldn’t say wike is wicked, ‘wike is harsh, he would have collected a fine’ blah, blah, blah shit. Wike clearly stated that there is total lockdown, he repeated that no hotels or companies should open. 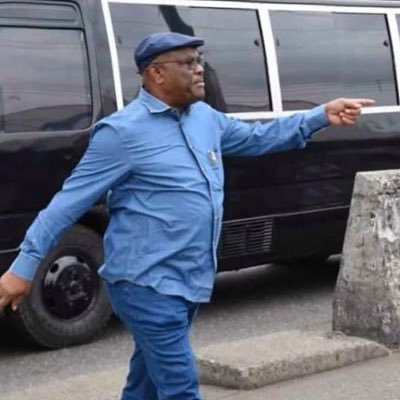