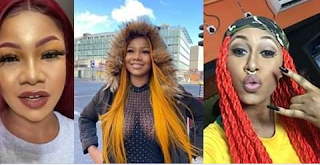 Controversial reality star, Natacha Akide, popularly known as Tacha, has empathized with embattled singer, Cynthia Morgan’s (Madrina) situation.
Earlier today, we reported that the dancehall singer who has been off the music scene for sometime now, revealed all she has been going through, via an Instalive chat. Cynthia who now bears the name ‘Madrina‘, revealed how Jude Okoye, took over her VEVO, Instagram accounts and made her stop using the stage name “Cynthia Morgan” .
Tacha has now expressed her concern, saying her heart bleeds for Cynthia and that robbing her off her stage name is vile and wicked.

The reality star wrote on twitter ;
“Firstly let me start off by saying that I’m currently in a state of SULLEN
Few years ago CYNTHIA MORGAN was UNSTOPPABLE her ART was UNIQUE
Personally I first fell in love with “Don’t Break My Heart” back then in school, my 200lvl to be more precise.
Cynthia Morgan could literally transit from the sweet spinster on “Don’t Break My Heart” to a MONSTER on “Bubble Bup”
Honestly, It’s bad enough that the music industry is so HARD for FEMALE artists to break in/through..
But what DOES purposely robbing “Cynthia Morgan of her freaking STAGE NAME!!! “….mean?
This is VILE I mean sheer WICKEDNESS that cannot be overlooked!!!
My heart bleeds for you in this trying times, but one I’m sure of “you will BOUNCE BACK and do GREATER than you did in the PASTHundred points symbol
Cynthia Morgan i BELIEVE in YOU
(seriously who doesn’t love you?),
and I promise to give my support by promoting your MUSIC or New PROJECT!! when you’re back to fu*k sh*t up!!

NB, Heard there’s a GoFundMe account, how legit is that?
Can someone please confirm this? Let’s go all out and show our support.
CYNTHIA YOU ARE LOVED” 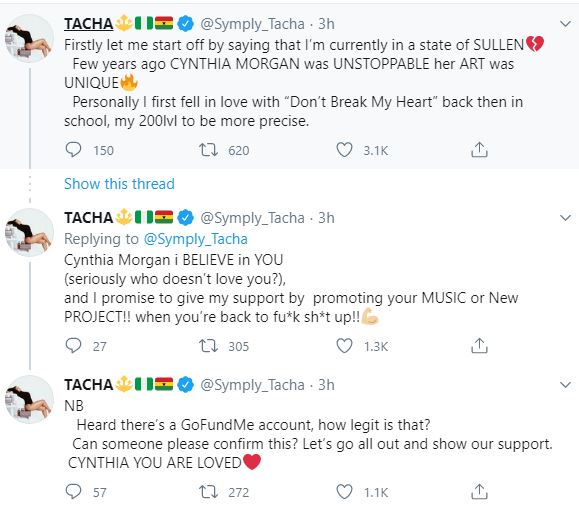