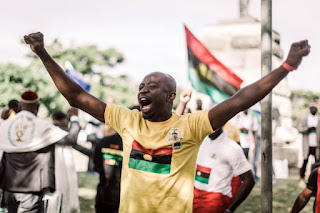 Biafrans should encourage themselves to courageously reclaim what rightly is their inheritance as a race. The game of divide and rule criminally instituted over decades of years by the Nigerian government-backed British oppressors against Biafran brothers and sisters in their own ancestral land, must have to be punctured and totally done away with. Evil reign of lies and deceit by the powers that be from the centre, has alienated Biafran families and this has been allowed to strive hinging on their selfish interests based on the abundant natural resources the people are endowed with. Biafrans are exceptionally blessed and the oppressors are relentlessly contending for the light this specie of humans ably represent to humanity. One of the bravest in the African continent are Biafrans but unfortunately, most of the people concerned, seem blindfolded in seeing and appreciating the stuff they are made of. This forms the reason behind why they (Biafrans) especially in the coastal areas of Biafraland, still allow and wallow in the manipulative tendencies of the oppressors.

In the year 2015, the academic report of the United States of America, pointedly revealed that the “Igbos Are The Most Brilliant Black Race”. Igbos in this context of description, represents Biafrans encompassing all tribes. And of course, Igbo is also one of the dialects/languages in Biafraland. The international community recognizes the people of Isoko, Ibibio, Igbanke, Idoma, Igala, Ijaw, Ogoni, Itsekiri, Efik, Annang amongst others across Biafraland, as Igbos. Even the Northern Islamists with their Yoruba counterparts in Nigeria who are relentlessly fighting to keep the division of Biafrans, know them as Igbos. It is disappointing that the most of the Biafran people, particularly those in the coastal areas yet feel ashamed to boldly proclaim their original identity. They have failed to critically find out why they are referred to as “Inyamiri” by the Northerners.

When these Northern Islamic jihadists want to carry out their attacks against “Igbo” residents in the North, they descend indiscriminately on all Biafrans and not those speaking Igbo as a language, because they see all as one people. Most Biafrans will not spot out this. The oppressors give the people such offensively meaningless divisive names like South-South and Niger Delta. These become accepted without realistically, finding out the game behind the distortion of the originality the people were associated with from creation.

The leader of the Indigenous People of Biafra (IPOB) globally, Mazi Nnamdi Kanu remains to be corrected in his intelligent historical exposé of whom Biafrans really are. It is needful that the following experiment be carried out to ascertain the facts:
* Carry out a search on who and who that make up the Yorubas (Oduduwas) and Arewa nations, including their originalities. It is grossly erronous and indefensibly unjustifiable for the seemingly smart intellectuals to define the native meaning/names of South-South and Niger Delta.
* What is the meaning of Rivers, Cross River, Delta and which of the rivers/delta? What native interpretation can be given to these names that have ancestral bearing with the African/Biafran people?
In Yorubaland, you hear names like Ondo, Ogun, Osun, Ekiti, Oyo, etcetera. In Northern Nigeria, you have Jigawa, Borno, Adamawa, Sokoto, Kano, Kaduna, Katsina and so on. These are native names that have meanings. Why no name like “Before River” over there like Cross River in Biafraland? There apparently has not been any hint or historical record that there exists no natural feature like rivers, trees, forests, etcetera, to be adopte as identification names in their regions/states. The intent here is not to raise condemnation of Biafrans naturally positioned along the coasts of Biafraland but to clearly point out the wicked conspiracy of the Fulani caliphate, their Yoruba counterparts and the British government.
According to a statement credited to the IPOB leader, Mazi Nnamdi Kanu on Sunday 17th May 2020 during his live broadcast on Radio Biafra, he said: “We lost the war (Biafra/Nigeria war) because the world did not hear our story”.
The earlier Biafrans at the coastal areas arise to this glaring reality, the better. Fighting each other is detrimental. The only enemy in the land are the Northern Fulanis. These are the deceivers that cooked up the lies that the Igbo Biafran brethren are the problems. These Fulanis are the ones that took away the original/native names God blessed the coastal Biafran brethren with and replaced such with artificials. Names that have absolutely no bearing with our ancestry. That which when publicly mentioned, elucidates stupidity and low self esteem.
All brothers and sisters of Isoko, Urhobo, Itsekiri, Ijaw, Igala, Idoma, Ogoni, Ihuruoha (Ikwerre), Annang, Ibibio (Igbo-nta), Efik and Igbo extractions, should unite and totally reject this artificial identity given by aliens that have no ancestral link whatsoever. There is absolutely no cultural, ideological and traditional affinity with them as Biafrans. There is this dire need to embrace and cherish the untainted Biafran identity divinity blessed us with as a people. Their moment of defeat has come and most assuredly, these strangers from the Sahel region must cover their faces in shame.
This is the time for the unity of Biafrans against the forces of hatred, disunity and in-fighting. There is no benefit that has been enjoyed since the forceful/deceitful amalgamation of 1914. It has been a cacophony of woes, division and slavery. The right time for extrication from all these evils, is now. With one voice, focus and determination, these marauding jihadists in Fulani killer herdsmen, Boko Haram terrorists, ISIS foot soldiers pretending and trooping into our land as Almajiris, will be victoriously rounded up and chased out. The plans of the oppressors to divide us, permanently pin us down and exterminate us as a people, will be completely defeated. The mistake of the pre-war years that culminated into the gruesome massacre of over six million Biafrans between 1967 and 1970, must never ever be repeated
“As far back as 1875, Britain called us Biafrans. If therefore Biafra was not a nation then, why did Britain send an emissary to us?”, the IPOB leader, Mazi Nnamdi Kanu questioned.
* Reasons Why The Oppressors Will Not Succeed Any Longer
There will not succeed this time around because Biafrans of the present generation have become exceptionally enlightened than the era of their father’s and grandfathers. There was completely no mapped out plan to painstakingly educate them the way Mazi Nnamdi Kanu is presently doing via his live broadcasts on Radio Biafra steadily being transmitted from it’s London Headquarters. The oppressors lack the capacity and capability to match this prowess, talkless of achieving their aims. When Biafrans are knittly bonded, they can realize their objectives whatsoever under God, without inhibitions.
* Freedom Remains The Only Remedy
Refreshing our memory, it is noteworthy to state here that our freedom remains pivotal. Many echo “freedom” but lack the clout to really appreciate, pursue and achieve it. Simply defined, “Freedom is the power or right to act, speak or think as one wants”. In other words, it is an ability to exercise your right as a human being. It is a right that defines one’s true identity. It is an inalienable right that gives one the go ahead to examine one’s status. It is the power to restore one’s lost inheritance. According to Buddha, “No one outside ourselves can rule us inwardly. When we know this, we become free”.
Biafran brothers and sisters naturally positioned at the coastal lines of Biafraland, are hereby advised to rise up and unreservedly embrace Biafra as the only feasible solution to the looming catastrophe the Northern Islamists are plotting against us. It is only through the instrumentality of genuine unity and love, devoid of fear of insincerity and parochial interests that will aid the anticipated victory over these vampiric Northerners.
This is the right time to act and decisively too