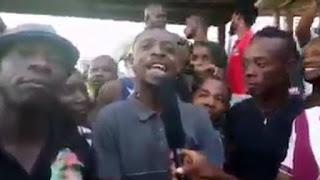 A video shared by Mazi Nnamdi Kanu, shows the Moment some Idoma and Igede indigenes declared that they are Biafrans, Not from the Zoo.
The Man who spoke on Behalf of others said he is from Idoma, he is a Biafran and not a zoo, After his speech, he sang Biafran song and all chanting.. Are you a Biafran? I am a Biafran.”
Reacting to the Video, Nnamdi Knau wrote: “THE #ZOO have no idea how much mess they are in. As they continue to engage washed out e-rats to fight their propaganda battles for them on social media, the great family of IPOB, through Radio Biafra, continues to win over the hearts and minds of all lovers of freedom within the new 2020 territorial boundaries of Biafra.”
“This video is an overwhelming evidence that Idoma & Igede have now taken their rightful position in the family of Biafran nations. Esan also has come home to Biafra.
“The new frontier is Benue, Kogi, Edo and Ondo, no longer Enugu and Anambra. We are uniting the chosen Children of God under one banner.”
Let me use this opportunity to continue to encourage the opporessed Hausa majority in the north to sustain their new found courage in Southern Kaduna for they too shall soon taste freedom.”
Fulani Janjaweed, the more you delay the worse it will get for you. UN supervised #Referendum now!”