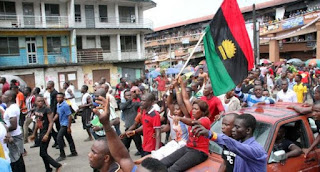 The leader of Indigenous People Of Biafra, Mazi Nnamdi Kanu has noted in a Statement by his Media and Publicity Secretary, Emma Powerful that Biafra restoration struggle is not mend for everyone to participate.
Speaking further He noted that the step which the Indigenous People Of Biafra(IPOB) is taking for the total liberation of Biafra is not expected to be welcomed by all people that identify themselves as a Biafran.
“We urge the good people of Biafra not to be unduly burdened when certain comments designed to pander to the Fulani Caliphate are uttered by some individuals or politicians as we march ever so remorselessly to our destination which is freedom for Biafra
Statement Reads: “Our position against the flawed foundational structures upon which our British colonial masters constructed the fraudulent edifice Flora Shaw originally named Nigga-area later anglicised to Nigeria by her lover Frederick Luggard must not be allowed to stand.
“It doesn’t matter what ignorant neo-colonial slaves say or do, the Fulani Caliphate will continue to use unity of Nigeria as an excuse to continue their age long camping of mass murder, genocide and ethnic cleansing as millions watch on impotently under the guise of keeping a British colonial product one.”
He said: “Each person is entitled to his or her opinion about whether to be a free soul or to continue living as the glorified slave. For us in IPOB, we have chosen to be free but we shall let those that wish to be enslaved to continue to do so till eternity. It’s all about choice.”
He reiterated that “we are not expecting every person to support Biafra agitation as long as we know that currently 99.9 per cent of our people are in support of the movement IPOB is making towards our quest for Biafra independence.
“We are not perturbed by the utterances of a few compromised politicians and their shameless agents, who because of their desire to please their slave masters, are ever ready to sabotage our collective interest. A million of them cannot deter us in our quest and unstoppable march to restore Biafra in the shortest possible time.”
We are equally aware that Biafran politicians serving Nigeria in Abuja and other places took an oath to be ‘faithful, loyal and honest’ to Nigeria which for some of them means subjugating their fellow citizens to the devilish whims of the caliphate masters in core north. So, we expect them to honour their pledge the same way those of us serving Biafra in different capacities have pledged to serve her with the last drop of our blood and make sure it comes into existence in our time.
“The ungodly statements from Biafra politicians is an encouragement to us because it only serves to fire up our determination to restore our lost identity and freedoms. We quite understand that they are under the influence of whatever it is their masters fed to them but in time they shall all be put to shame or worse.
IPOB is well organised the world over and solidly built on an immovable rock. Mere words cannot change our strategy nor will it dent our resolve to restore Biafra in every truth and honesty. But our assurance to them is that in the end, they will regret their actions. The day of reckoning is fast approaching.”