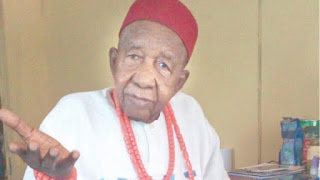 In a matter of weeks, Col Emma Nworah Nwobosi would turn 82. He participated in the January 15, 1966 coup, which was the first of its kind in Nigeria. He led soldiers to fight in different battlefields in defence of the then young republic called Biafra and later became the chief of staff to Dim Chukwuemeka Ojukwu. In this interview with EZIOMUME SOLOMON, Nwobosi, who also holds the prestigious title of Ogene Obosi kingdom in Idemili North local government area of Anambra state, speaks on the coup, the war and the present day Nigeria.
What was the reason behind the 1966 coup?
It happened because, things were going haywire in Nigeria. So, we, the young officers in the army were not happy that things were not going well. The then civilian government in Nigeria led by Alhaji Abubakar Tafawa Balewa, as Prime Minister, was not in control of the affairs of the country because, he had a bigger boss called Sir Ahmadu Bello, who was at the time, the Premier of Northern Nigeria. About 95% of problems of Nigeria as at that time, did not emanate from the Prime Minister, who was supposed to be in charge of the country but from a regional premier, who had all the powers, and these powers he had were not constitutional; he arrogated them to himself, because, he was the leader of the Northern Peoples Congress, NPC, where Tafawa Balewa belonged. We were the middle cadre in the military then, and we saw the unpleasant way things were going in the country, and we couldn’t stomach them anymore
Among those of us who were not happy was Major Chukwuma Kaduna Nzeogwu. He got that name Kaduna because, he was born in Kaduna. Nzeogwu took over from a British, who was in charge of the country’s intelligence unit in Lagos, the then capital of Nigeria. Nzeogwu uncovered a number of things that were going wrong in Nigeria; and, as a military man, he had to report to his boss, the Prime Minister. But as I told you earlier, the Prime Minister was not in charge. He was a “Yes Sir” man. Later, Nzeogwu was transferred from Military Intelligence to Kaduna; where he became the Commandant of the Nigerian Military College.
I got to know Nzeogwu during our days at St. John’s College, Kaduna. He was my senior then. I and some other officers, as well as Nzeogwu were having spare times to talk about the unfolding events in Nigeria then. Everybody started getting dissatisfied with the events in Nigeria. That was when we started thinking of changing the government. Some of us in the North were talking about executing the coup; some were discussing about it in Ibadan, some in Lagos and others in Enugu, where we had military outfits in the country then. That was how the thought of the first military coup was conceived.
Some Nigerians tagged it Igbo coup. How true is that?
Different ethnic groups joined in the first military coup. There were Igbo people, there were Hausa, Yoruba, Efik, among others.
How did you find yourself in the battlefield?
I was called upon by our Head of State, Lt. Col. Odumegwu Ojukwu, to command an artillery. Though, the most senior officer then that should have done that was Alexander Madueboh. He was my boss at the Nigerian army; but in Biafra, he was assigned to a brigade. So, I was given the mandate to set up artillery, so, I moved to Okigwe, where I assembled old artillery officers and we started training. We were issued combat weapons. We were, however, disappointed not getting the kind of weapon we expected for the war, but Ojukwu encouraged us to move on with what we had. We later moved from Okigwe to Hilltop. There was a secondary school there. Already, Major Tim Onwuatuegwu was situated there with his own men. So, we shared that college premises and dormitory. Later on, I was directed to move my men to Nsukka front, beyond the University campus, in Enugu state. As at then, the war had broken out proper.
Could you recall the deadliest battle you fought?
The deadliest battle I fought was in Obolo-Afo in Enugu state. We lost men and had a lot of casualties. It was in that battle that I sustained a life-threatening injury. I never knew I would survive the wound. Shell bomb struck me, broke my ribs and my spinal cord. When it hit me, I had a blackout. I thought I was gone. Biafra soldiers carried me shoulder high to our Brigade headquarters in Ukehe, Enugu state, and later to Enugu township, where I received emergency treatment in our hospital. My partner, a young soldier, who used to sit around me and run errands for me, was killed by the shell. It was when I became conscious in the hospital that I was told that the shelling that hit me also shattered him.
CONTINUE READING FROM DAILYSUN