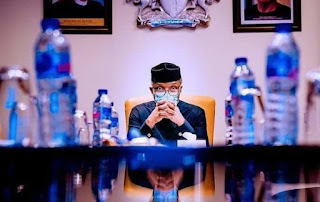 The leader of the Biafra Indigenous People of Biafra, Mazi Nnamdi Kanu, expressed his concern about the continued disappearance of Vice President Yemi Osinbajo from public view.
Kanu explained that Osinbajo could be dead, adding that whoever that was buried as deceased Abba Kyari might have been the vice president.
In a statement on Saturday, the IPOB leader said;
“WE ASK AGAIN & AGAIN, YORUBA WHERE IS YOUR SON YEMI OSINBAJO?
“Once they start photoshoping your pictures and claiming you are too busy to address the people LIVE, then know you are either dead, in a deep mess or both.
“Ever since Aisha Buhari & Fulani rulers of the #ZooNigeria sanctioned the cold blooded murder of an unknown person they buried in place of the cremated Abba Kyari, Yemi Osinbajo has not appeared in PUBLIC or given any live interview. His wife has been placed under virtual house arrest
The blood stained coffin used at the purported burial is a constant reminder of the murderous tendencies of this Fulani rogue regime and the fact that whoever they buried as Abba Kyari may well have been Osinbajo. It is worrying that Osinbajo now appear only in photoshopped pictures, exactly what did when Buhari died in London before they unveiled Jubril Al-Sudani.
“Look at Osinbajo’s picture below and the fake shiny table, exactly the same software used in Jubril’s first recorded address from Havana Cuba. How many bottles of water can one man drink? See how they stupidly mutiplied the water bottles. What a shame! Photoshop PRESIDENCY
“Reverred Yoruba elders and media please be courageous enough, look for your son, don’t be quiet. Investigate whose blood stained the coffin meant for Abba Kyari since we now know death from COVID-19 doesn’t result in blood oozing out of a head wound probably caused by a bullet fired from close range.”