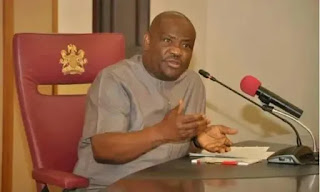 A statement issued by the state Commissioner for Information and Communications made this known on Wednesday.
Recall that Wike on Sunday demolished Prodest Hotel in Alode and Etemeteh Hotel in Onne, in Eleme Local Government Area of the state.
The hotels were demolished after it violated an Executive Order on COVID 19, despite warnings from the State government.
Speaking on the development, Nsirim stated that Prodest Hotel manager had invited the wanted PDP Eleme youth leader, Princewill Osaroejiji, who came with thugs to assault task force operatives who were on ground to close down the facility.
He said, “As we speak, one of the task force operatives lost his life last night. Governor Wike and the Rivers state security council took the decision to demolish the hotels in the interest of Rivers State and her people
Having demolished that hotel, Governor Wike has approved that a primary school be constructed at that location to serve Rivers people. This is what a responsive government will do.
“The fight against coronavirus in the state has been premised on the rule of law. It was Governor Wike who first signed an executive order that led to border closure and other actions.
Nsirim further stated that the fight against coronavirus in Rivers state is in the interest of Rivers people and the entire country.
It was also done to protect officials of the Rivers state government who are implementing the executive order. No government will allow its officials to be killed by thugs whilst they carry out lawful directive.”