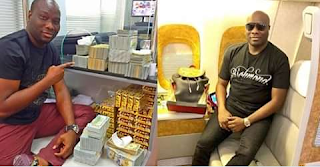 Popular Nigerian Big man and bureau de changer, Ismaila Mustapha otherwise known as Mompha, has raised eyebrows after he recently deleted( or archived) all his posts on Instagram.
Mompha is renowned for his conspicuous display of wealth on his social media account and this continued after his infamous arrest by the EFCC. However, a recent check on his intagram page shows that all posts-bar-one are nowhere to be found.

Some social media users are insinuating that Mompha’s unexpected action was motivated by the fear of the FBI.
This however isn’t the first time Mompha will delete all his posts, he did the same when he was released by the EFCC on bail of 100m Naira.